a touch of the beat

Aly & AJ's new album a touch of the beat gets you up on your feet gets you out and then into the sun is out on May 7th! Go HERE to pre-order & pre-save the 12 track album!

Aly @ “How I Live Now” Premiere

Alyson attended the “How I Live Now” Premiere yesterday. She looked beautiful. We’ve added some pictures of her at it to the gallery. Previews and gallery link below:

Also, Aly posted on twitter that she landed a new role! Can’t wait to find out what it is!

We’ve added a bunch of new stills from Aly’s movie “Sequoia” to the gallery (Credit to Sabrina Lantos). We’ve also added a few captures from the Honora Productions Company Reel (you can view it here) to the gallery as well.

Aly’s upcoming movie “Sequoia” now has an official site. The site doesn’t have much on it yet, but they do have a form where you can enter your email and subscribe to updates for the movie! I really hope this means we will be getting a trailer soon! Click on the image below to go the site: 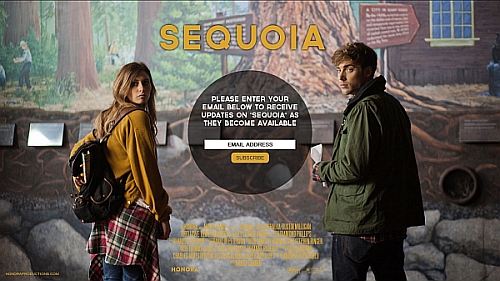 Published
by Kay
with 2 Comments

We’d like to take a moment and wish Aly a very Happy 24th Birthday!!! Go send Aly a birthday tweet on twitter and wish her a great day!! Or you can leave a happy birthday message in the comments below :]

Bandslam’s Aly on Nudity, Kissing and R.Pattz
Aly Michalka is growing up.

But not too much. The 20-year-old, best known from Aly & AJ, tells me there’s not a chance in heck she’ll be stripping down for a movie.

“I don’t think it’s necessary,” Aly says. “I think there are other ways to shoot a love scene or a sexy scene without taking your clothes off.”

However, she does get to stir things up a bit in the upcoming Easy A, opposite Superbad’s Emma Stone…

“It’s a really quirky, raunchy comedy,” Aly said. “I play [Emma’s] crazy best friend who has the worst mouth on her possible, definitely a different role for me. She cusses like a sailor.”

Ms. Aly’s newest flick, Bandslam, isn’t too much of a departure for her. She costars with Vanessa Hudgens and Gaelan Connell as the popular girl in school who helps put together a rock-and-roll band with some fellow students. Read More..

“Bandslam” star Aly Michalka sees teen years fading“I listened to a lot of music that moved me on those days, like Aqualung and Danny Elfman,” she recalled. “They kind of helped me get there. Thankfully, I’ve never gone through something as traumatic as what Charlotte has to go through.”

These days, however, Michalka is looking on the brighter side of life. Her next two films — a psychological thriller called “The Roommate” and a quirky comedy “Easy A” — are now in editing and expected in theaters in 2010. Read More..

Get to know Aly Michalka
Aly Michalka might play a teen in the high school flick “Bandslam,” but within seconds of talking to the 20-year-old, you’re met with such self-assuredness, you feel like you’re chatting with a seasoned 30-something.

“I’m kind of an A-type personality. I’m very driven as a person in general,” says the actress, singer and songwriter from her parent’s house in California, where she still lives with her 78violet bandmate and sister, A.J. Today, on a rare day off, she’s laying out and reading “A Wolf at the Table,” by Augusten Burroughs. Read More..

Hey. We’ve added more candids to the gallery. And you can now listen to all three of Aly’s songs from the “Bandslam” soundtrack: Amphetamine, I Want You To Want Me & Someone To Fall Back On.

OUT NOW – PURCHASE THE ALBUM HERE

Founded by Kay & Aud
Established on July 5, 2004
Header by Kay
Theme by Sin 21
Domains: AlyandAJ.org, Aly-Michalka.org, AJ-Michalka.org, Alyson-Michalka.org
Disclaimer | Privacy Policy | Cookie Policy
Photo Archive Hosting over 16,958 photos!
All images, articles, videos, etc. are copyright to their respective owners & no copyright infringement is intended. Content on this site is used under the fair use copyright law section 107. Please contact the webmistress if you have any questions or if you would like certain content or images removed. This is a 100% non-profit website made by a fan for fans.